Legend of the Five Rings: The Card Game - Coils of Power

“In the destruction of your enemies, may you find peace.”
–Hida Kiyomasa

The Emerald Empire faces war on all sides. Mighty armies stamp across the realm, and hordes of horrifying Shadowlands monsters menace Rokugan from the south. The Great Clans have been tempted in countless ways—will dissension and self-interest triumph over unity? Can anyone bring Rokugan together in its hour of need?

Fantasy Flight Games is proud to announce Coils of Power, the fifth Dynasty Pack in the Temptations cycle for Legend of the Five Rings: The Card Game!

As with the earlier Dynasty Packs of this cycle, you’ll find a host of new tools for every Great Clan within this expansion. Multiple clans receive massive new Army characters as war sweeps across Rokugan, while other clans gain unique powers to manipulate the fate on friendly and hostile characters. With a new stronghold, two new provinces, and a full array of dynasty and conflict cards, any dedicated player will want to be sure they pick up Coils of Power. 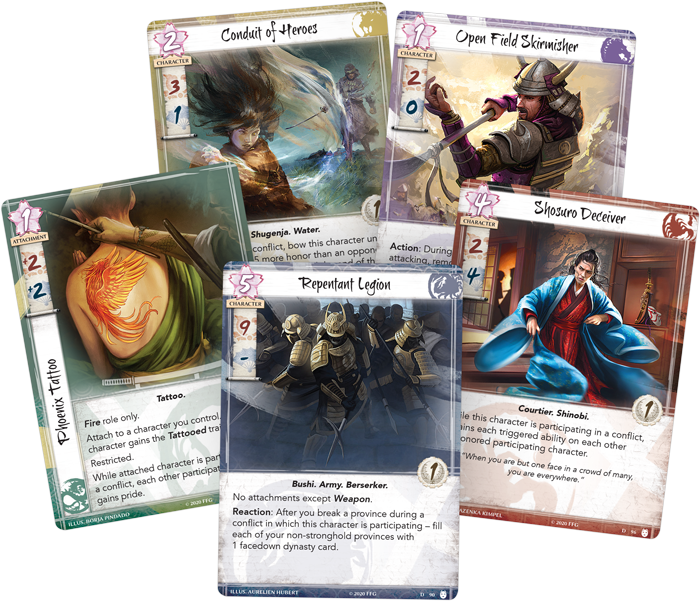 The Lion and the Unicorn can each muster massive, powerful armies and an undeniable military presence, but even they cannot match the dogged determination and perseverance of the Crab Clan. The Crab defend Rokugan from the threats of the Shadowlands, and in recent days, those threats have been nearly omnipresent, with new attacks testing the strength of the Great Carpenter Wall on a daily basis. 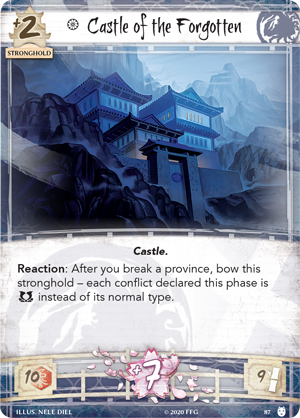 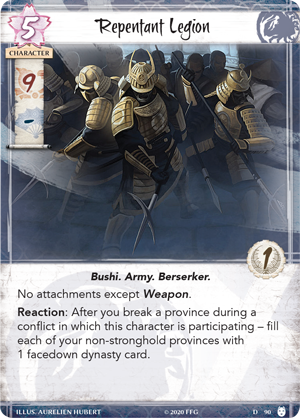 Few characters are better suited for crushing military conflicts than the Repentant Legion (Coils of Power, 90). This enormous Army has no ability to influence a political conflict, but in a military conflict, the Repentant Legion can break provinces entirely on its own. In fact, it’s a good thing the Legion is so eager to break provinces: after you break a province with the Repentant Legion, you can fill each of your non-stronghold provinces with one facedown dynasty card! By ensuring that you’re always summoning the full might of the Crab Clan into action, you should have the power to overwhelm your foes and crush their provinces in short order.

Even with armies at your beck and call, you’ll need plenty of tricks to push past your opponent’s defenses… and that’s where Battle Meditation (Coils of Power, 100) comes in. After you break a province during a conflict with a Berserker character, such as Repentant Legion, you can play Battle Meditation to immediately draw three cards, refilling your hand and refueling your onslaught for the next conflict.