Mandalorians are among the most revered warriors in the galaxy, their iconic armor a symbol of their combat prowess. More than just protection in combat, this armor carries within it the proud traditions of every Mandalorian. But now these traditions are under siege by the Empire, which has driven a stake between the great houses of Mandalore. Soon, you can rise up and fight to reclaim this past with the Clan Wren Unit Expansion for Star Wars™: Legion!

This expansion gives you everything you need to add one of two units of powerful Mandalorian warriors to your Rebel armies. First, you can join forces with the Mandalorian Resistance to throw off the shackles of the Empire. Alternatively, members of the legendary Clan Wren are ready to lend their special abilities to your forces.

No matter which units you choose to bring to the fight, the seven Mandalorian miniatures you find in this expansion are highly customizable. You can adjust how high three of these miniatures fly into battle with their jetpacks, while the other four can be assembled with a variety of weapons and poses. Finally, eight upgrade cards help you fully tailor them to fit your strategy.

Read on for a full look at everything included in the Clan Wren Unit Expansion!

The history of Mandalore is a history of war. Raised to revere battle, combat is a defining trait of Mandalorian culture. The reputation of Mandalorians is so great, in fact, that they are known for facing Jedi in single combat and you’ll find the warriors of the Mandalorian Resistance share the same ferocity and fearlessness as their forebears.

Centuries of martial traditions have therefore prepared the warriors of Mandalore to face an enemy as great as the Galactic Empire and the skill they display on the battlefield more than makes up for their limited numbers. The Mandalorian Resistance immediately becomes one of the most mobile trooper units available to the Rebel Alliance, pairing a speed of three with the ability to use their jetpacks to gain a height advantage on their enemies.

These jetpacks aren’t the only piece of equipment to give them an edge in battle, either. Outfitting your Mandalorians with some Ascension Cables ensures that no obstacle or patch of terrain can keep them from their goal. Beyond this, Mandalorians are most well known for their iconic armor, and it gives them an extra layer of defense from attack pools with the Pierce keyword. At the same time, this armor still allows its wearers to remain nimble in combat and deftly dodge out of the way of incoming fire.

Mandalorian armor has uses beyond defense, of course. It can also hold a variety of weapons that give its wearer an edge in combat. An entire squad of Mandalorian warriors unleashing some Jetpack Rockets, for instance, can nearly wipe out an entire trooper unit or cripple an enemy vehicle. Similarly, carrying some EMP “Droid Poppers” can give them an edge when facing off against droids and vehicles. 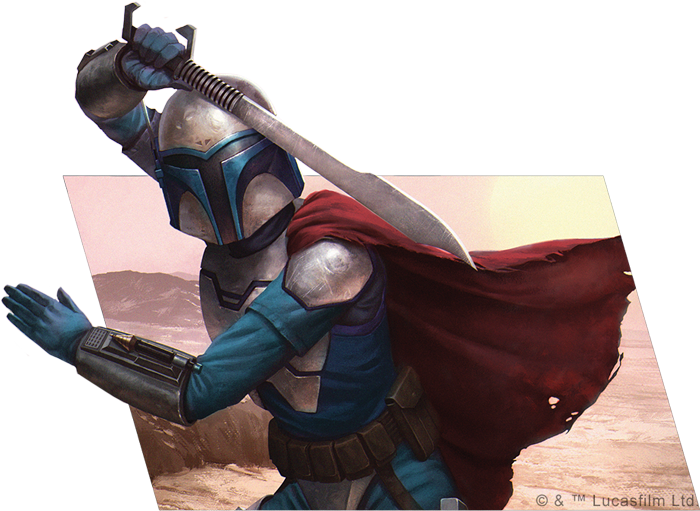 Clearly Mandalorians prefer to be prepared to take on any opponent, but powerful opponents such as Jedi Knights require exceptional melee combat skills. For these situations, a Beskad Duelist  not only gives your Mandalorians a new weapon to add to their melee attack pool, they also provide another way of using aim tokens to increase melee damage while leveraging dodge tokens to help sheild the entire unit from piercing attacks.

As skilled as they are, these standard Mandalorians are surpassed by the storied warriors of Clan Wren. The soldiers of this ancient clan boast melee combat expertise beyond their fellow Mandalorians and are even more durable, requiring two wounds to bring down.

But this is only the beginning. Clan Wren is defined by the unique skills of some of its most prominent members and two of them must be equipped to this unit. Clan matriarch Ursa Wren brings a steely resolve to the battlefield, keeping her family on the move even while under fire. Similarly, Tristan Wren calls upon his experience as a former Imperial Super Commando to lay down suppressive fire.

It’s only natural for both Ursa and Tristan Wren to operate more effectively alongside Rebel operative Sabine Wren, and the Clan Wren unit gains either an aim token or a dodge token if they are at range 1–2 of her at the start of the Activation Phase. In addition to rerolls, this aim token can be especially useful, no matter if it’s used to increase the range of Ursa Wren’s attack or allow Tristan to pierce through his target’s defenses. When united and working in unison, few opponents can withstand the onslaught of Clan Wren.