The space battles of X-Wing are fought with much more than laser cannons and torpedoes. These battles also see heavily armed bombers wreak havoc on enemy formations by dropping powerful bombs into the middle of enemy flight paths, causing massive damage to any ships unfortunate enough to be caught in the blast radius.

Within the Fully Loaded Devices Pack, you’ll find numerous deadly devices that can be used to arm your squadron to the teeth, including the upgrade cards and tokens for Proximity Mines, Proton Bombs, Seismic Charges, and Bomblets, as well as an Electro-Proton Bomb and a Connor Net. Additionally, this pack also sees the return of Cluster Mines and Ion Bombs from X-Wing’s first edition. 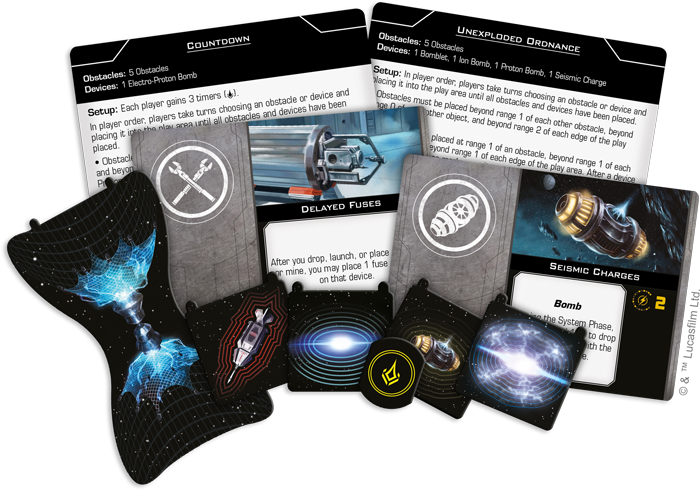 On top of these cards and tokens, this pack also contains an additional six environment cards that use devices as part of their setup, allowing players to battle in deadly minefields, fly their ships through starfields riddled with unexploded ordnance, or even maneuver to avoid continuous bombardments.