The Lord of the Rings LCG: The Hunt for the Dreadnaught

Vicious Corsairs have pillaged the Gondorian coastline for months, but now, rumors whisper that the shipyards of Umbar have constructed the most devastatingly gigantic ship ever known: the Dreadnaught. Many are suspicious of such extraordinary reports, but if true, this massive warship is an enemy unlike any you’ve faced before. It will take an equally colossal effort to take down such a potent foe. It’s up to the greatest heroes of Middle-earth to assemble a formidable fleet and scour the seas for this mighty threat!

Fantasy Flight Games is proud to announce The Hunt for the Dreadnaught, a unique scenario pack for The Lord of the Rings: The Card Game!

You and your fellow heroes of Middle-earth take to the high seas and battle the Dreadnaught in this newest scenario pack. Whether you’re playing with a single group of one to four players, or with any number of groups in Epic Multiplayer Mode, The Hunt for the Dreadnaught is a thrilling race to find and sink a powerful warship. You’ll even find a brand-new contract that can be added to your deck in any game of The Lord of the Rings: The Card Game, challenging you to make a perilous voyage with a super-sized deck! 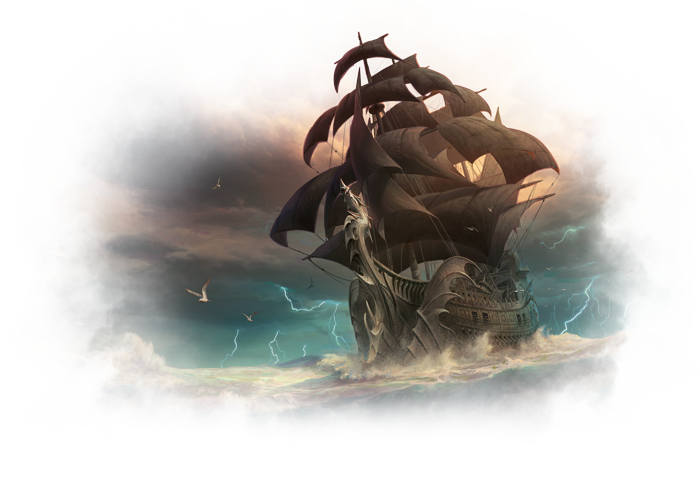 Fastest in the Fleet

Taking down the Dreadnaught will be a titanic undertaking, but before you can send that monstrous warship to the bottom of the ocean, you’ll need to gather your own ships and hunt down the Corsairs. Even if you have some experience with ships in The Lord of the Rings: The Card Game, you’ve never led a fleet like this into battle. 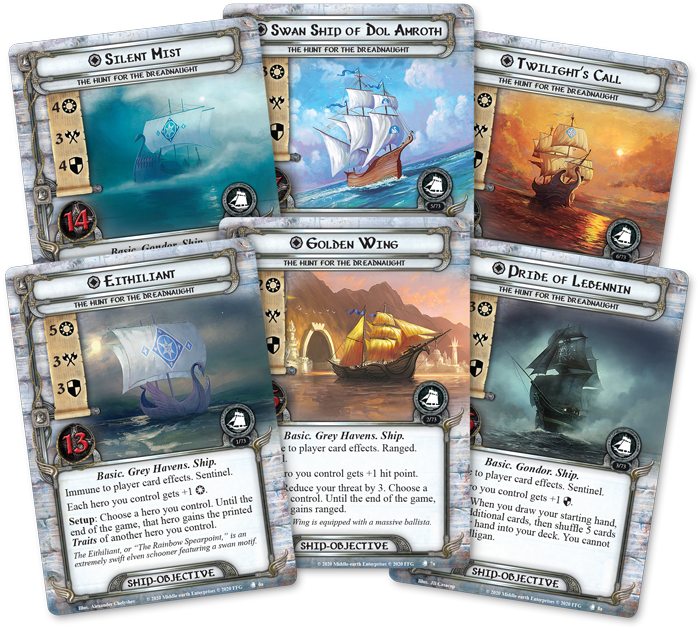 What’s more, each of these heroic ships are double-sided, featuring a stronger, Upgraded version on the reverse side. If you’re fortunate enough to find your way to a Belfalas Shipyard (The Hunt for the Dreadnaught, 34), you can upgrade one of your Ships—and you’ll need every advantage if you’re going to take down the Dreadnaught.

Prepare to be Boarded

Your adventure begins as you scour the high seas for the Dreadnaught, battling Corsairs that you find along the way and searching for the Corsairs’ flagship. Once your groups have advanced to the second stage, however, you’re launched into a fleet battle unlike any you’ve seen before—and at its centerpoint, the monstrous Dreadnaught (The Hunt for the Dreadnaught, 13a), towering above the rest of your fleet on an appropriately-sized giant card. You and the other heroes of Middle-earth will have to work together to destroy this massive warship—but it’s far from the only enemy Ship you’ll have to contend with. 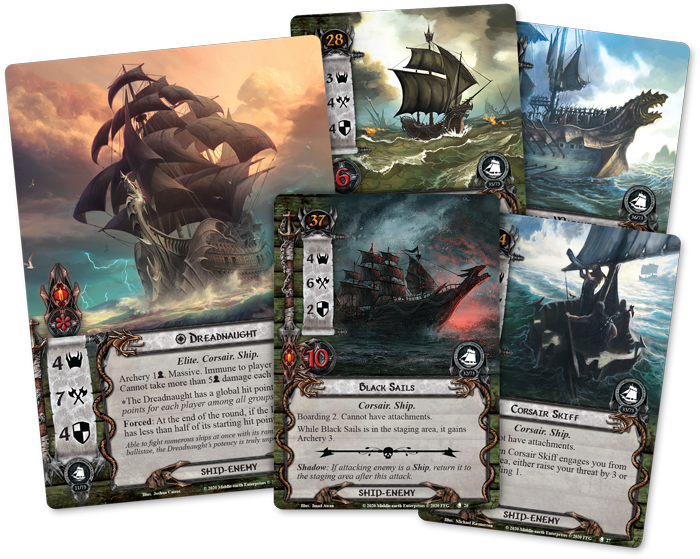 You’ll also notice that many of these ships feature the new Boarding keyword. At the beginning of this scenario, you’ll pull the thirteen non-Ship, non-unique Corsair enemies into their own separate Corsair Deck. Whenever a ship-enemy engages you from the staging area, it uses the Boarding keyword to bring that many additional enemies from the Corsair Deck! Even as you maneuver your ships into position to attack and sink the Dreadnaught, your heroes will be fighting a desperate battle on the rolling decks of your ships against the Corsair boarding parties, such as the Daring Buccaneer (The Hunt for the Dreadnaught, 22) or the Southron Sailor (The Hunt for the Dreadnaught, 24). It’s a war on the high seas unlike any other, and a match for the greatest battles you’ve faced throughout The Lord of the Rings: The Card Game!