Mansions of Madness: Second Edition - Path of the Serpent

"You trespasssss too far," one hissed. "You will not leave thisss jungle alive." The creature nocked another arrow, but two gunshots rang out and the creature fell, dead.
Leo aimed his smoking pistol at another one of the serpents. "Remember, we still have five miles yet. We better make this quick."
Ursula drew out her survival knife. Norman was flipping through a thin book and muttering. As one of the snakes charged, Daniela took a deep breath, loosened her grip, and raised the machete.

For all its beauty, the jungle conceals many perils. From unrelenting heat and dwindling supplies to cursed idols and booby-trapped temples, any who would dare face these dangers are sure to long for the relative safety of the city they knew. Now in Mansions of Madness, you take on the role of Arkham’s bravest investigators who must step into the unexplored wilderness of the Amazon jungle and explore crumbling ruins, discover the secrets of lost civilizations, and stop a serpent’s curse before the world descends into chaos. In three new scenarios, you will battle horrifying serpent creatures, face stone monstrosities that come to life, and beat the ever-present danger of being lost to the jungle forever. Are your ready for a new challenge?

Fantasy Flight Games is pleased to announce Path of the Serpent expansion for Mansions of Madness—now available for pre-order at your local retailer or online through our website with free shipping within the continental United States!

As you prepare to set out for new vistas in this latest expansion for Mansions of Madness, you will need a new team of investigators who can stand against the ever-increasing powers of the Mythos. Path of the Serpent brings together four new investigators from across Arkham, each with a unique backstory and skill they have learned from their everyday lives and previous encounters with the Elder Gods and creatures of the Mythos. 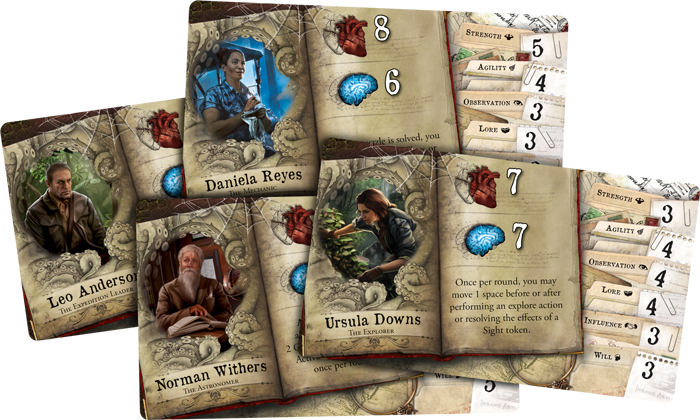 Leading the expedition into the unknown is the hardened Leo Anderson, able to help his allies cut through the jungle underbrush and allow them to move one space when he performs a move action. At his right hand is Ursula Downs, the explorer. Once per round, she may listen to the call of the unknown and choose to move one space before or after exploring or interacting with a sight token.

But the strange happenings of Arkham do not only affect those who are prepared to face the dangers of the jungle as easily as others face any normal day. There are others trapped by the powers of the Mythos. Daniela Reyes, the mechanic, loves learning how things work, constantly taking machines apart and putting them back together. Thus, whenever she or one of her comrades solves a puzzle during an adventure, she may either gain two clues or discard one horror. Then rounding out the roster is Miskatonic Astronomer Norman Withers. Similar to Daniela, Norman may also gain two clues or discard one horror once per round, provided he is in an outdoor space where he can read what is written in the stars. 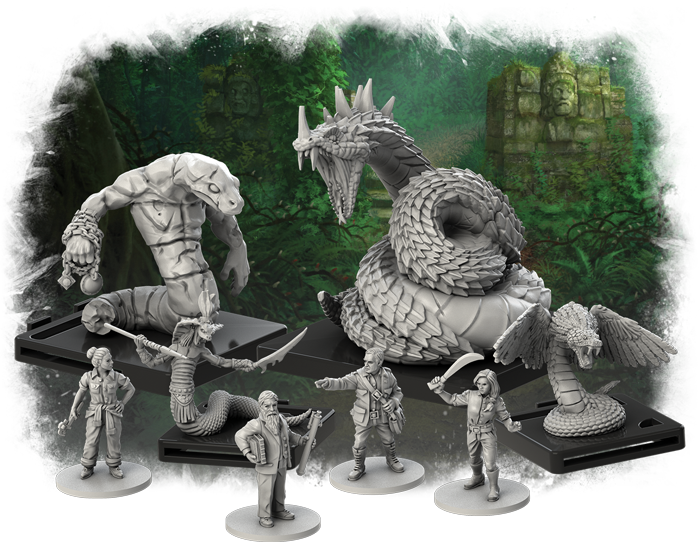 Once you have assembled your team of investigators, you are ready to embark on adventures to lands unknown in three new action-packed scenarios that will push your body and mind to their limits and test your will to survive. In The Jungle Awakens, a lavish Arkham garden party shows off the host's recent acquisitions from a South American expedition. However, when the manicured lawn and trimmed hedge are mysteriously overtaken by vines, ferns, and towering trees, the guests quickly discover that taking relics out of the jungle can have ruinous consequences...

Then, in Into the Dark, your team of investigators have been hired to assist a South American expedition. A thrilling opportunity to be sure, but the crew has one curious rule: while you are in the jungle, you are to avoid the darkness at all cost. As the sun begins to dip below the tree line and the expedition team awaits your arrival, you cannot help but wonder if there is more behind this rule than mere superstition. Do you dare to abandon the safety of the campfire glow to uncover the secrets of the trees? If you leave the mystery unanswered, will you ever be free of the haunting questions of the unknown?

Lastly, Lost Temple of Yig takes your investigators to ancient stone halls where serpentine priests attempt to reforge their broken bonds with their god, Yig. Their success could herald the end of humanity, unless you can pass the mysterious trials of the temple and put a stop to their nefarious plot! During these adventures in the jungle, you are sure to encounter all sorts of challenges you have never seen before, including a new puzzle specifically designed for the Path of the Serpent expansion. The ring puzzle challenges investigators to align matching symbols across four concentric rings. There are three moveable outer rings and one inner ring which does not move, each with six sections that contain one symbol. Each ring contains the same symbols in the same order, but with the wear of time, some of the symbols have worn away and you must deduce their identities. As a puzzle step, you may rotate any of the outer rings one section at a time until the all the outer rings are in the same position as the inner ring and each symbol, hidden or not, is aligned. If you are unable to unlock the secrets of the temple, you may find yourself entombed with countless others who came before you, and the rest of humanity will pay the price for your failure. You cannot let that happen!