Since the four members of the Wrecking Crew decided to join forces, they’ve been a thorn in the side of every great Marvel hero from Thor to the Defenders. Not just common thugs, the Wrecking Crew’s greatest asset stems from the magic imbued in team leader Wrecker’s Crowbar, which grants each member immense physical strength and a mystical link between them.

Now, The four members of The Wrecking Crew are breaking out of prison, and only you can stop them!

With 73 brand-new cards, this single scenario puts four villains in play at once, each with their own side scheme and deck. Can your heroes withstand the assault from Wrecker, Piledriver, Bulldozer, and Thunderball?

Hello, heroes.
There has been a riot at Ryker’s Island penitentiary. The prisoners are loose and attempting escape. Among them are the Wrecking Crew. They broke free of their power inhibitors and overpowered the guards. We need you to intervene!

The Wrecking Crew presents a whole new challenge for your crew of Marvel heroes. If your heroes hope to succeed they’ll have to work together to defeat four different villains. 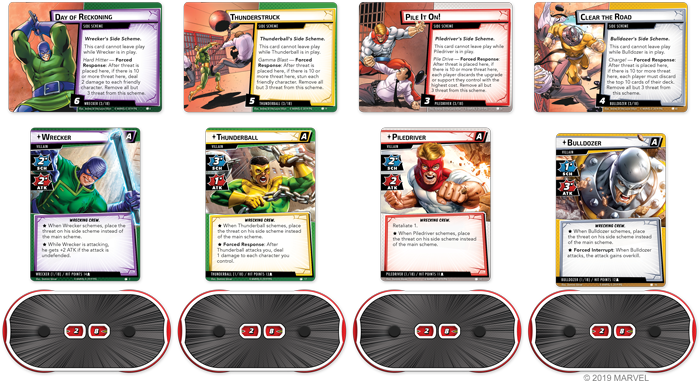 Each member of the Wrecking Crew includes their own side schemes and deck of encounter cards! Keep in mind The Wrecking Crew Scenario Pack will not include any additional hit point dials. If you do not have enough hit point dials, you can use dice, counters, pen and paper, or some other method to track each villain’s hit points!

Though members of the Wrecking Crew all have their own side-schemes, they are all working together to achieve a common goal: to breakout of prison (The Wrecking Crew, 1B)!

Various card effects (like the Breakout scheme) can switch the active villain, but the active counter will always begin in the hands of Wrecker (The Wrecking Crew, 2).

The self-proclaimed leader of the crew doesn’t mind foregoing his escape to deal some damage to the heroes. Not only can Wrecker produce big damage on undefended attacks, his Day of Reckoning (The Wrecking Crew, 4) side scheme is a ticking time-bomb of pain, ready to deal damage to every puny hero on the field when 10 or more threat is placed on it! Each Wrecking Crew side scheme follows a similar pattern, triggering a nasty effect when they reach 10 or more threat and then starting the cycle over with 3 threat remaining on the scheme. Thwarting these side schemes at strategic times will be key to victory. 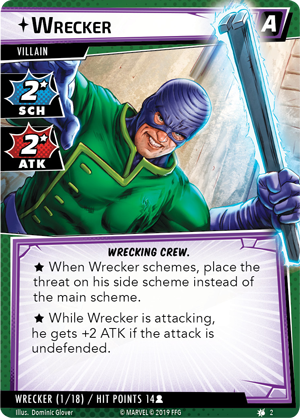 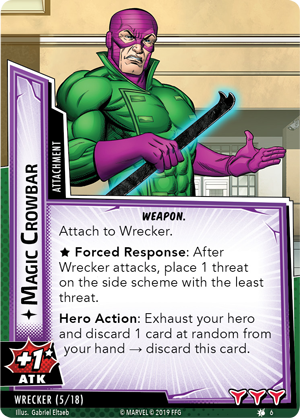 The Wrecking Crew's power stems from a single source: Wrecker's Magic Crowbar (The Wrecking Crew, 6). Not only does this attachment boost Wrecker’s own strength, but he can use it to quickly add threat to the other members of the crew’s side schemes! It will take a hero making a sacrifice to separate Wrecker from his Crowbar, but this could mean the difference between victory and defeat!

While the unique setup of the wrecking crew leaves little room for modular encounter sets, you can still affect the difficulty of the challenge. Every member of the Wrecking Crew has an alternate “side B” that increases the difficulty of the fight. If you’re feeling confident, you can always take on Wrecker Side B (The Wrecking Crew, 3) with increased attack and scheme values!

While Wrecker may act as the leader of the crew, Thunderball (The Wrecking Crew, 17), acts as the brains of the operation. While he doesn’t bring the pure pain that wrecker can, Thunderball can quickly advance his scheme, Thunderstruck (The Wrecking Crew, 19) to set back every single hero on the field by stunning them! With so many stun tokens permeating the field, the heroes will have to spend at least a turn clearing them before they can hit back at the crew. 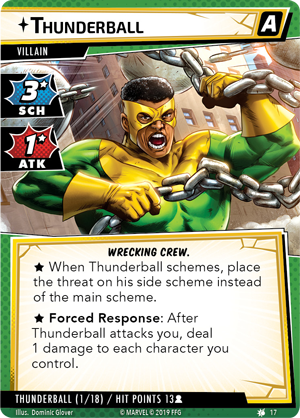 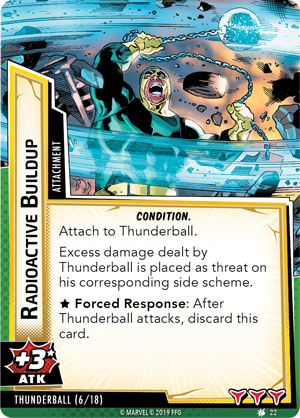 Radioactive Buildup (The Wrecking Crew, 22) gives Thunderball a massive attack against one hero, and should an ally valiantly decide to take the hit, the excess damage goes to his side scheme! When Thunderball is the active villain, every single hero on the field will have to be cautious, or they may find themselves thunderstruck!

Piledriver (The Wrecking Crew, 32) invites heroes to attack him and face the wrath of his massive fists, exacting vengeance with Retaliate 1. Piledriver’s hall of fame of pain extends beyond heroes, as he’s able to target upgrades and supports with his scheme, Pile it On! (The Wrecking Crew, 34) . Like Thunderball, this gives the heroes a setback they might not be able to recover from. Without their precious toys and allies, do they really stand a chance against the might of The Wrecking Crew? 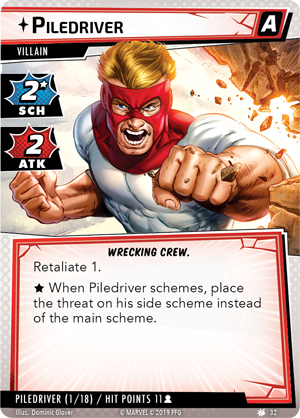 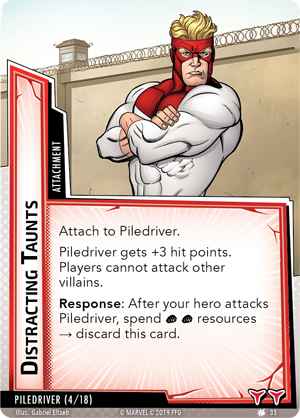 While attacking Piledriver is a surefire way to get a punch to the face, your heroes may not have a choice when he brings out the Distracting Taunts (The Wrecking Crew, 35) boosting his health and making him the only eligible target on the field! Heroes can spend two physical resources to discard Distracting Taunts, but they’ll have to indulge Piledriver at least once to have the opportunity. While attacking Piledriver is a dangerous proposition, he does have the fewest hit points among the members of the Wrecking Crew, making him a natural first target if you can withstand the brutal counter-assault.

Finally, Bulldozer (The Wrecking Crew, 46) completes the Wrecking Crew by attacking the heroes head-on! Bulldozer gains the overkill trait when he attacks, meaning any excess damage dealt to an ally after they are defeated is then transferred to a hero! No one is safe from Bulldozer, even the cards in your deck. When his Clear the Road (The Wrecking Crew, 48) scheme reaches 10 threat, every hero discards the top 10 cards of their deck! 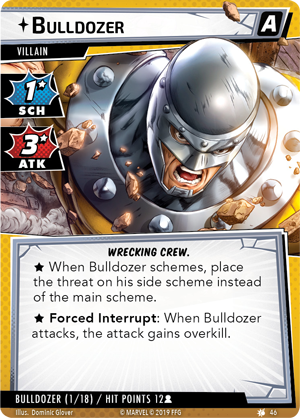 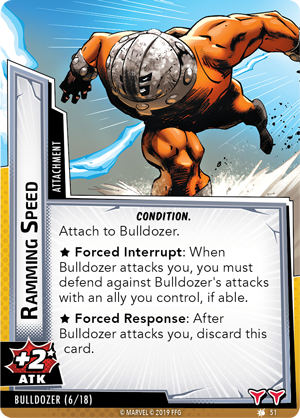 No one is safe from Bulldozer, Ramming Speed (The Wrecking Crew, 51) is a massive attack designed to defeat your allies on the field, while sprinkling some damage on your heroes. When Bulldozer is the active hero, your allies are always in danger, and you may not have a choice in whether or not they are the target of bulldozer’s wrath.

The Lord of the Rings LCG: Escape from Khazad-Dum Custom Scenario Kit

Merv: The Heart of the Silk Road