“The Professor has a dream. I have a plan.”

As Charles Xavier’s first student, nobody is more dedicated to the Professor’s dream of peaceful coexistence than Scott Summers, better known as the hero Cyclops. Armed with powerful optic beams and tactical genius, Cyclops leads his fellow X-Men on their missions as a brilliant field commander.

This commander of the X-Men blasts his way into battle with this expansion pack, which introduces Cyclops as a new playable hero along with his fifteen signature cards. With a pre-built Leadership deck ready to play from the get-go, you’ll be able to lead the X-Men’s charge into battle from the moment you open the box. With his powerful optic blasts and tactical brilliance, Cyclops is a natural leader and a fantastic addition to any team. 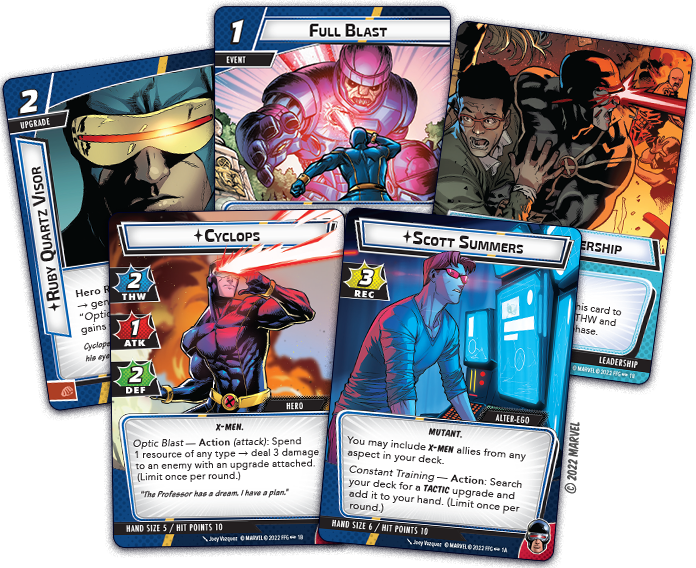 As a renowned leader of the X-Men, it makes sense that Cyclops would be a master of teamwork, and his playstyle absolutely reflects this. 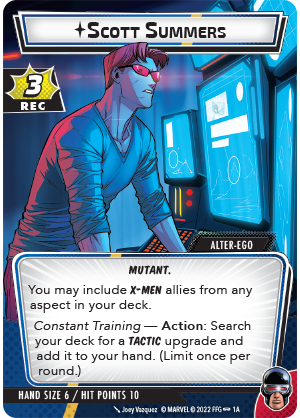 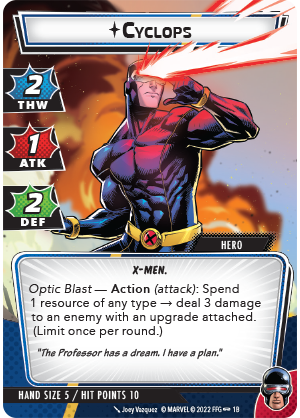 Right off the bat, Scott Summers (Cyclops, 1A) can include X-Men allies from any aspect in his deck. It doesn’t matter what aspect you choose to play with; you can always take your favorite X-Men allies with you against any foe. Aside from that, Scott’s Constant Training lets him search his deck for a Tactic upgrade, which plays off the ability of his hero form. As Cyclops (Cyclops, 1B), he is armed with a powerful Optic Blast, which lets him deal 3 damage to an enemy with an upgrade attached to it once per round.

See where this is going? Tactic upgrades like Exploit Weakness (Cyclops, 5), Practiced Defense (Cyclops, 6), and Priority Target (Cyclops, 7) all attach to enemies, letting you mark a target for your Optic Blasts while also providing effects for your allies and fellow heroes to take advantage of. Use your position as Field Commander (Cyclops, 4) to ensure that you attach a Tactic upgrade to an enemy before anyone else takes their turn, especially since the “temporary” keyword makes the upgrades discard themselves at the end of the round. Enhance your Optic Blasts with your Ruby Quartz Visor (Cyclops, 3), then devastate a target with a Full Blast (Cyclops, 8). If you find yourself running low on Tactic upgrades, then turn to your Tactical Brilliance (Cyclops, 10) to pull one out of your discard pile and keep your momentum going. 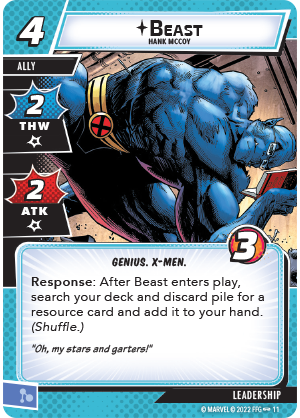 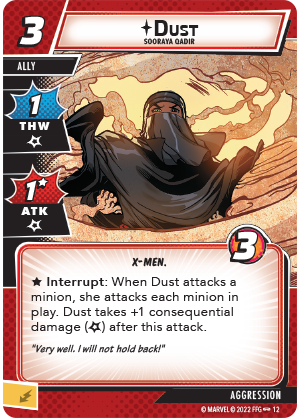 In line with his focus on teamwork and position as commander, Cyclops enters the fray with a pre-built Leadership deck that gives him even more strategic options. Take command of allies like Beast (Cyclops, 11) and Dust (Cyclops, 12) and put them through some Danger Room Training (Cyclops, 15) to bolster their strength, then launch a Coordinated Attack (Cyclops, 16) against a tough minion, which you can finish off with an Optic Blast! Utilize Effective Leadership (Cyclops, 18) and Teamwork (Cyclops, 17) to get the job done, then head back to the Danger Room (Cyclops, 21) to train up some new recruits. With Utopia (Cyclops, 20) serving as your base of operations, Cyclops is sure to lead your team to victory!