The Lord of the Rings: Journeys in Middle-Earth – Spreading War

“These are the Rohirrim, as we name them, masters of horses, and we ceded to them the fields of Calenardhon that are since called Rohan; for that province had long been sparsely peopled. And they became our allies, and have ever proved true to us, aiding us at need, and guarding our northern marches and the Gap of Rohan.” – Faramir

War has come to the realm of Men. Shadows spread throughout Rohan and Gondor, from the tangled depths of Fangorn Forest to the haunted ruins of Osgiliath. You have encountered ruthless mercenaries that have invaded the kingdoms of Men under orders from a mysterious figure, and now you must strike out to hopefully quell the tide of violence before it becomes too great.

Fantasy Flight Games is proud to announce the Spreading War expansion for The Lord of the Rings: Journeys in Middle-earth!

Taking place in the proud kingdoms of Gondor and Rohan, this expansion unlocks an all-new campaign with fifteen scenarios that see you traveling between the kingdoms and defending them from enemy forces. Spreading War also comes with six new heroes, over 20 enemy miniatures, 18 double-sided journey map tiles, new roles, new terrain types, and much, much more!

The kingdoms of Men call for aid. Will you answer? Gather your Fellowship and rise to the challenge in Spreading War! 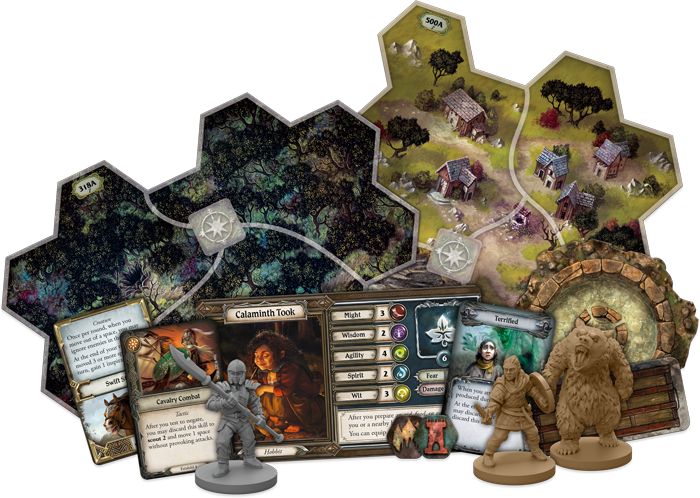 With an onslaught of brutal mercenary attacks targeting both Gondor and Rohan, it will take a group of courageous heroes to withstand the assault and push them back. Fortunately, Spreading War provides six new heroes to help defend the kingdoms of Men, each bringing their own unique strengths and skills to your Fellowship. 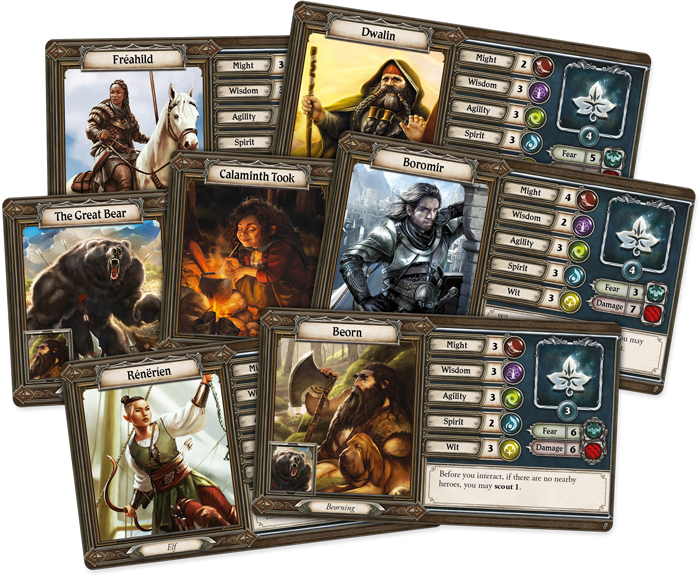 First among these fine heroes is Beorn , the taciturn shapeshifter whom Bilbo and the Traveling Company encountered on their journey to Erebor. More at home in the woods than among people, Beorn excels at scouting and safely making his way through the wilderness of Middle-earth. The greatest—and most iconic—feature of this soft-spoken beekeeper is his ability to transform into a hulking beast of great spirit and might. Use Beorn’s innate ability to help you search your skill deck for The First Beorning , then prepare it to transform into The Great Bear . As part of this transformation, you will actually swap Beorn’s character card, equipped items, and plastic figure to those of the Great Bear, which means Beorn is essentially two heroes in one! 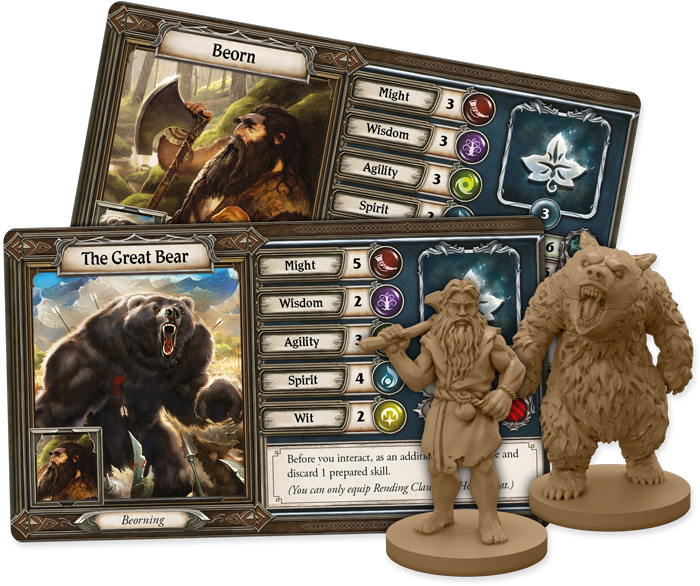 Though he cannot equip normal items while in his bear form, there can be no mistake that Beorn is a powerful figure on the battlefield. With a whopping 5 might, Beorn can use his Rending Claws to reliably rip through enemies, and his Hoary Coat lets him shrug off even the most gruesome of injuries. When you are ready to shed your bear form, take advantage of The Great Bear’s extra cost to interact and discard The First Beorning from play to walk as a man once more.

Even while he isn’t a bear, Beorn is a versatile hero. Use Beast Tongue in tandem with Beorn’s innate ability to scout for free and gain another action, then attack an enemy as a Friend of Bees to stun them. If you defeat them, you can use The Day Will Come to scout again, allowing you to fish for The First Beorning if you feel like donning the guise of The Great Bear once more. 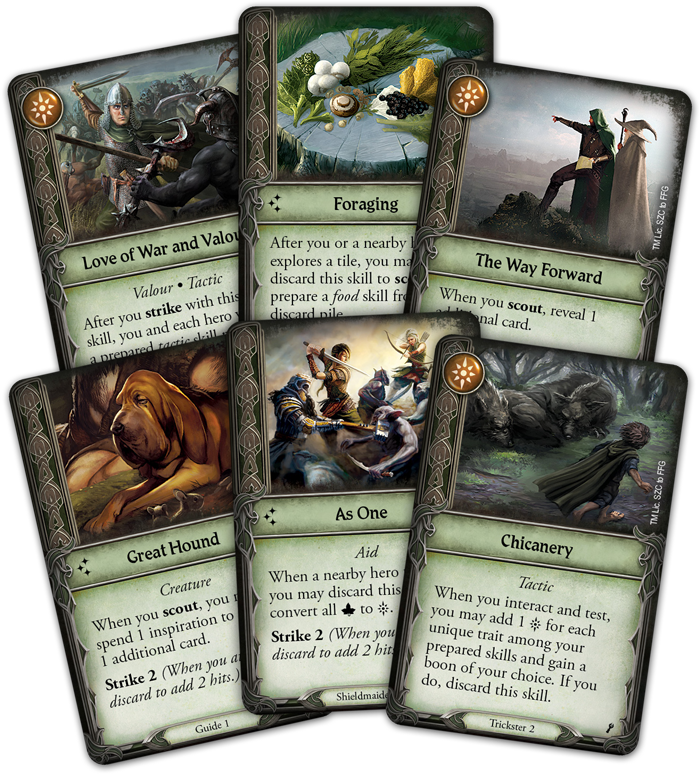 Beorn’s affinity with the wilderness makes him an excellent guide, which also happens to be one of the six new roles added in the Spreading War expansion! Point your allies to The Way Forward to help everyone move further toward the goal, then use the Great Hound to take even further advantage of Beorn’s innate ability.

We will go into further detail on the other five new heroes included in Spreading War in a future preview, so stay tuned!

Whether you serve as a Guide for your allies or help defend them as another role—such as Shieldmaiden—your mission in Spreading War remains the same: protect the kingdoms of Gondor and Rohan from the Enemy’s mercenary onslaught. The campaign of this expansion spans the length of a year in-game, and the decisions you and your fellow heroes make across all four seasons will shape the twists and turns of the story. At certain story beats, you will be able to travel between the two kingdoms, but choosing when to do so will have lasting effects on how the campaign plays out. Will your Fellowship focus on bolstering one kingdom’s defenses over the other? Or will you prioritize gathering information and investigating the mastermind behind the threat? 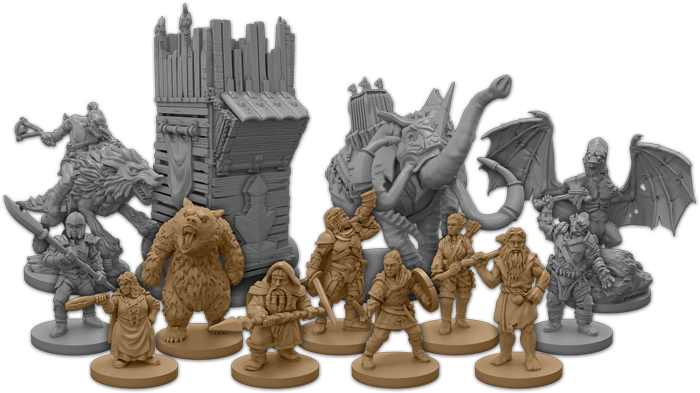 The mercenary threat is not to be trifled with. You may even find yourselves facing a powerful War Oliphaunt!

These adventures will bring you face-to-face with the aforementioned mercenaries and other dark forces as you travel between Gondor and Rohan, and the longer it takes you to find the orchestrator of the assaults, the harder they will become to repel. In the spring, the mercenary threat is small and easier to handle, but by the time autumn rolls around they will be truly formidable. New enemy types like the War Oliphaunt, Soldier, and Fell Beast all behave in ways that shake up the flow of combat, such as allowing other enemies more movement or inflicting the new banes on the players—we’ll go into more detail on those at a later date.