The release of Unfinished Business, the long-awaited expansion for Star Wars™: Outer Rim, is fast approaching! As we head into the final months before the expansion comes out, we’d like to take a look back at everything we’ve revealed so far. This includes content we recently showed off in our unboxing and gameplay preview livestreams. Whether you missed the streams or simply hoped for another look at it all, read on to see what’s been shown so far!

First and foremost, one of the most important aspects of this expansion is the addition of new playable characters. 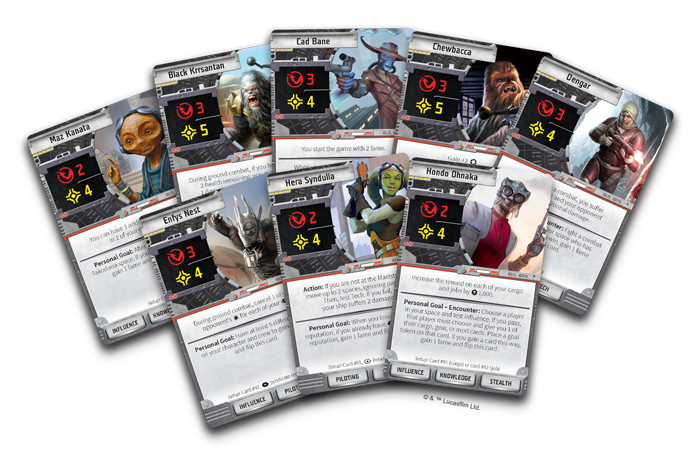 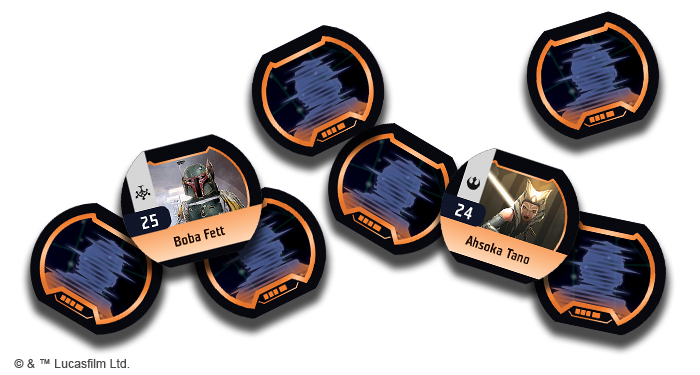 Unfinished Business introduces a set of 11 new contact tokens that are colored orange to set them apart from the tokens of the base game. These orange contacts are a mixture of playable characters from the base game—such as Boba Fett and Han Solo—and characters that haven’t been seen in Star Wars: Outer Rim before, such as Ahsoka Tano. If you ever encounter a contact token for a character that someone is currently playing as, you immediately discard it and can encounter something else at that space.

With the addition of encounterable characters to the playable roster, players may occasionally find themselves receiving a bounty for a character that someone else is playing as. These “player bounties” are resolved a bit differently than normal—since contact tokens belonging to controlled characters are immediately discarded, the only way you can complete a player bounty is by challenging that player to a fight. Win the combat, and you can reap the rewards! 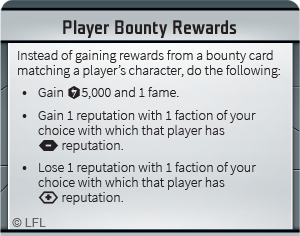 Another major addition in Unfinished Business is the introduction of the Core Worlds to the game board.

These new endcaps each feature a Core Worlds space—either the Spinward Core or the Trailing Core—which function as planet spaces for all game purposes, such as market actions and encounters. Both Core Worlds spaces use the same deck of encounter cards, and whenever you encounter them you can choose to either visit the Core Worlds or attempt to travel Across the Core. 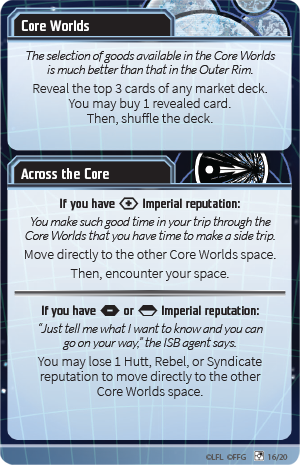 Crossing through the Core Worlds has potential for great rewards, but it also comes with a lot of risk. The Empire controls the Core Worlds, and trying to cut across the Core can be extremely dangerous and/or costly for players with negative Imperial reputation. You’ll have to weigh your options carefully if you wish to cross the Core, otherwise you’ll be stuck going the long way around. 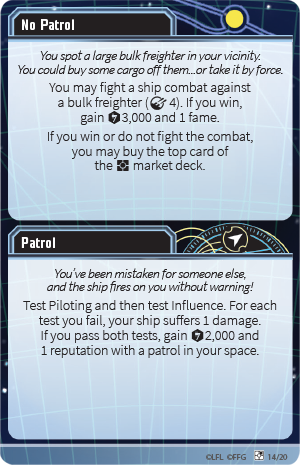 Outside of the Core Worlds, each of the encounter decks from the base game will be expanded with more cards. With more things to see than ever before, you’ll want to encounter as many planets as possible during your quest for fame. And who knows? Maybe you’ll indulge in some light piracy along the way.

With new sights to see and people to meet, it’s only natural that Unfinished Business would also add plenty of new goods to pick up during your adventures. 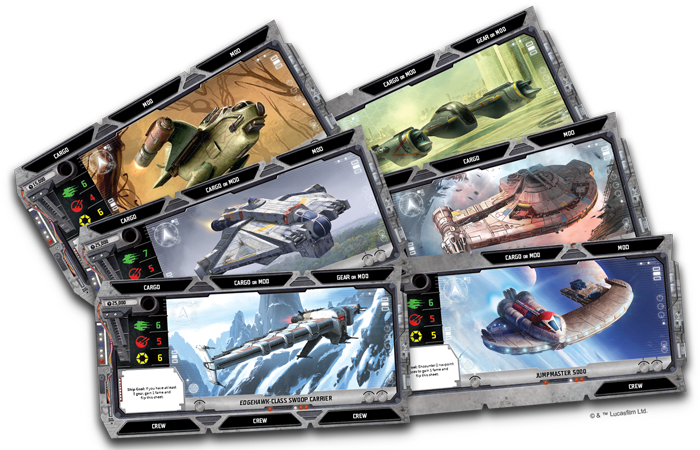 First and foremost is a spread of new ships, such as the scrappy  Rogue -Class Porax-38 Starfighter and the rebellious VCX-100 Light Freighter . With each ship comes a new ship goal and a new opportunity for fame and prestige; the only question is, which vessel is the right one for you?

Once you have your new ship, you’ll need some things to fill it with. Fortunately, this expansion provides plenty of new gear, cargo, mods, and jobs for you to experience! Many of these cards have two assets: one on each end. These “rotating assets” have special features or represent 2-part tasks, and the rules for rotating them depend on the cards themselves. For example, the Bowcaster is a powerful weapon, but it takes great strength to reload; delivering Astromech Droid Parts to Ord Mantell gets you some completed Astromech Droids that you can then deliver to Naboo; and a Custom Paint Job paired with impeccable dogfighting can make you even more famous than before. 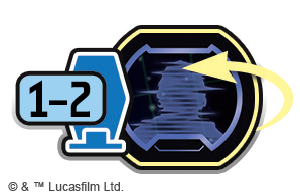 You may have noticed that these cards have a new icon on them that shows a contact token and a range of numbers. This is the “reveal contact icon,” which can be found on most of the market cards added in this expansion. Similar to patrol movement icons, when a card is flipped faceup after a player buys or gains a card from the market, any reveal contact icon on that card is resolved. So long as the player count is within the range of numbers on the icon, the current player must choose a facedown contact token on their planet and turn it faceup, if able. This doesn’t mean they encounter that token, but it does mean they can see who it is and decide if they want to encounter the contact during their encounter step.

If all the new things to see and goods to grab aren’t enough for you, then you’ll be happy to know that Unfinished Business also gives you lots of new things to do. For starters, a pile of new interactive jobs, such as Honest Robbery and Sail Barge Sabotage , present you with opportunities to earn credits and fame by interacting with other players, while new passenger cargo cards like the Rebel Traitor let you build up your reputation. 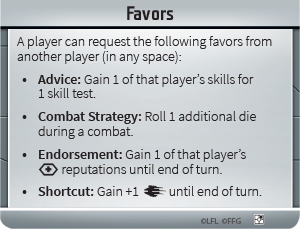 The expansion also adds some fantastic new features that shake up how Star Wars: Outer Rim is played. With the new favors system, you’ll have even more opportunities to negotiate with your opponents. Play your cards right, and you may put other players in your debt, allowing you to call on them in a moment of need to give yourself a boost. If you and your fellow players want to change up how you win the game, you can utilize ambitions. 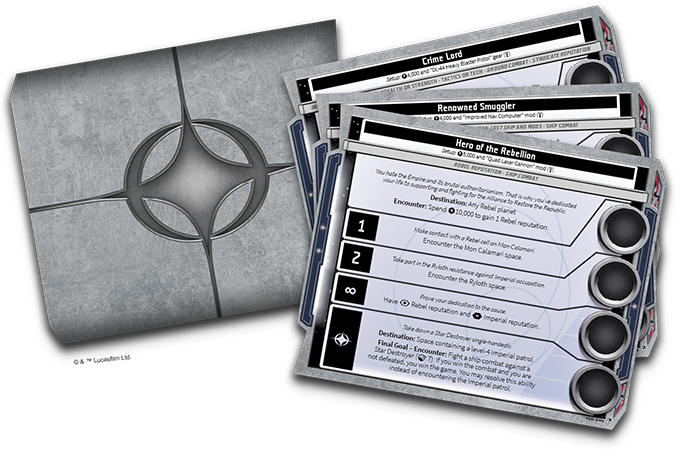 Ambitions provide players with a series of goals that they must complete in addition to gaining the requisite number of fame in order to win the game. Each player gets their own ambition sheet with its own set of goals. Some sheets, such as Servant of the Emperor , have you completing tasks in a specific order, while others—such as Galaxy's Most Feared —can have you completing the goals in any order you want. Do you wish to become the Hero of the Rebellion ? Or do you have designs to reign as a Crime Lord ? Or maybe your goal is simply to become the most Renowned Smuggler in the Outer Rim? No matter what form your ambitions take, they are sure to enhance your games of Star Wars: Outer Rim for ages to come!

Finally, for those of you who enjoy playing the game solo, Unfinished Business adds in a brand-new AI opponent for you to face: the bounty hunter AI deck! 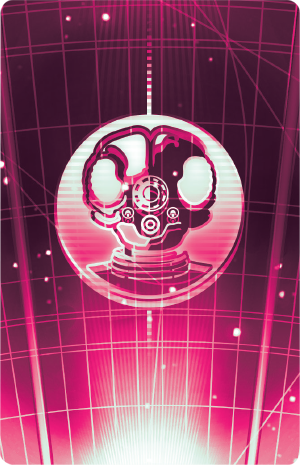 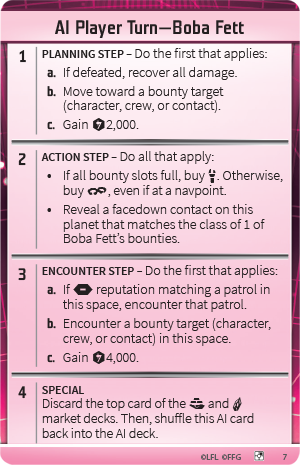 This deck allows you to face off against an AI-controlled character with a more aggressive, bounty-hunting playstyle than the AI deck from the base game. When you choose to face a bounty hunter AI, you must select one of the characters who begins the game with databank card #90 to be your opponent. Each of those characters has their own AI card that gets shuffled into the bounty hunter AI deck, which adds a bit of extra flavor to their playstyle compared to the others. Playing the game with the bounty hunter AI deck is similar in many ways to playing with the AI deck from the base game, and the best part is you can use both decks in tandem with each other to have a “three-player” game with two AI opponents! You’ll find some character-specific cards for the base game’s AI deck here as well, so no matter who you face, they will all have their own spin on the gameplay.